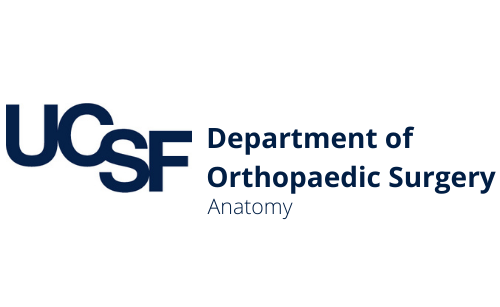 These modules are designed to teach gross anatomy and common surgical approaches to orthopaedic surgery residents and practicing surgeons through a self-paced, structured curriculum that includes learning objectives, indications, an anatomy review, illustrated descriptions of approaches, and review questions.

The UCSF Ortho Anatomy Core is meant to be an educational resources for orthopaedics trainees. Learners should be practicing surgeons or surgeons in training.

At the end of this module, the learner should be able to:

1) List the indications for a deltopectoral approach to the shoulder

3) Discuss in detail the deltopectoral approach to the shoulder, including:

-Sequence of the superficial and deep dissection

Indications for a Deltopectoral Approach to the Shoulder:

1) Open reduction internal fixation of fractures of the proximal humerus

7) Debridement and drainage of acute or chronic septic shoulder

The superficial portion of the dissection is performed within a true internervous plain between the deltoid (axillary nerve) and pectoralis major (medial and lateral pectoral nerves).  The deltoid is retracted laterally while the pectoralis major is retracted medially.  This internervous plane is conveniently marked by the course of the cephalic vein which runs in the junction between these two muscles.

The deltopectoral approach can be conceptualized as occurring through three consecutive muscular layers.  The most superficial layer is that created by the deltoid and pectoralis major muscles.  The middle layer consists of the clavicopectoral fascia and the conjoint tendon (short head of the biceps and coracobrachialis muscles) which originates from the coracoid process of the scapula.  The deep layer consists of the rotator cuff muscles (supraspinatus, infraspinatus, teres minor, and subscapularis) which surround and is intimate with the shoulder capsule.

An additional muscle with a complex relationship to the shoulder that may be encountered during this approach is the long head of the biceps brachii.  This muscular head originates from the supraglenoid tubercle on the cephalad portion of the glenoid labrum.  It then passes through the shoulder joint itself in the rotator interval.  Once it exits the shoulder joint capsule the tendon travels distally in the intertubercular groove (also called the biceps groove) between the greater and lesser tuberosities of the humerus covered by the transverse ligament, which is an extension of the subscapularis tendon beyond the lesser tuberosity.  From there is passes beneath the tendinous insertion of the pectoralis major on its way to the anterior compartment of the arm.

Origin: Lateral half of the clavicle, acromion, and scapular spine

Insertion: Deltoid tuberosity of the humerus, half way down the lateral humeral shaft

Origin: Medial half of the clavicle, manubrium, sternum, and aponerosis of the external oblique

Insertion: Lateral lip of the intertubercular groove of the humerus

Origin: Coracoid process of the scapula

Origin: Coracoid process of the scapula

Insertion: Middle of the medial shaft of the humerus

Insertion: The primary tendon inserts onto the biceps tuberosity on the proximal radius.  An aponeurosis also forms from this muscle distally in the antecubital fossa which spreads out and inserts superficial on the muscles of the flexor pronator mass of the proximal medial forearm.

Origin: Supraspinous fossa of the scapula

Insertion: Superior facet of the greater tuberosity of the humerus

Origin: Infraspinous fossa of the scapula

Insertion: Middle facet of the greater tuberosity of the humerus

Insertion: Inferior facet of greater tuberosity of the humerus

Origin: Subscapular fossa of the scapula

Insertion: Lesser tuberosity of the humerus

The only vascular structure that is routinely encountered during the deltopectoral approach to the shoulder is the cephalic vein.  This vein begins as tributaries along the radially aspect of the forearm and travels along the anterior lateral aspect of the arm prior to running in the deltopectoral groove proximally over the shoulder.  It eventually joins with the basilic vein to form the axillary vein.

Part 1: Lateral edge of the first rib to the medial border of the pectoralis minor

Part 2: Deep to the pectoralis minor

Part 3: Distal to the lateral border of the pectoralis minor to the inferior border of the teres major, where it then becomes the brachial artery

Each portion of the axillary artery has named arterial branches which arise from it.  Conveniently, the number of branches from each part corresponds to the numerical ordering of the part themselves:

No nerves are routinely exposed during the deltopectoral approach.  The musculocutaneous nerve runs through the coracobrachialis muscle 5-8cm distal to the coracoid process and is at risk only if dissection is errantly made medial to the conjoint tendons which arise from the coracoid process or if these same tendons are rigorously retracted during the case.  Injury to this nerve will produce weakness in the muscles of the anterior compartment of the arm (coracobrachialis, brachialis, biceps brachii).  Injury will also produce numbness on the radial aspect of the forearm; the distal extent of the musculocutaneous nerve is the lateral cutaneous nerve of the forearm.  Similarly the axillary nerve is in close proximity during this approach, running just inferior to the lower border of the subscapularis muscle.  Injury to this nerve will produce weakness in the teres minor and the deltoid and numbness on the lateral aspect of the shoulder.

The brachial plexus is a complex anatomic structure.  Its underlying purpose is to take a series of five ventral spinal nerves at its proximal end and combine and redistribute them on the distal end to generate a multitude of functioning peripheral nerves.

The brachial plexus can be artificially divided into five sections to aid in understanding it course.

Nerve Roots:  The 5 ventral rami of C5-T1 typically contribute to the plexus.  Occasionally individuals will have a plexus from C4-C8 or C6-T2, termed pre-fixed and post-fixed respectively.

Trunks: The combination of some of the nerve roots creates 3 trunks.

Divisions: Each trunk listed above divides into and anterior and posterior division, producing a total of 6 divisions (3 anterior, 3 posterior)

Cords: The 6 divisions combine to generate a total of three cords, which are named with respect to the positions to the axillary artery.

Lateral Cord: The combination of the anterior divisions of the superior and middle trunks

Posterior Cord: The combination of the posterior divisions of all three trunks

Medial Cord: The simpe continuation of the anterior division of the inferior trunk

Terminal Branches: The three cords each divide at their terminal extent to generate 6 branches.  Two of these branches, one from the medial and one from the lateral cord, quickly recombine to reduce the final number of terminal branches to 5.

Musculocutaneous nerve: A final terminal branch of the lateral cord

Median nerve: The combination of a final terminal branch from each of the medial an lateral cords

Ulnar nerve: A final terminal branch of the medial cord

Radial nerve: A final terminal branch of the posterior cord

Axillary nerve: A final terminal branch of the posterior cord

In addition to the structure just described, the brachial plexus also gives off numerous minor terminal branches along various places along its course:

Nerve to the subclavius: From superior trunk, innervates subclavius

Upper and Lower subscapular nerves: From posterior cord, innervates subscapularis (both) and teres major (lower only)

Medial cutaneous nerve of the arm: From medial cord, sensation to medial arm

Spaces and Intervals around the Shoulder:

Two spaces and one interval are often used to describe the relationship of various neurovascular structures around the posterior aspect of the shoulder.  A region designated as a space actually has the contents listed pass through the space.  The region designated as an interval only has the contents visible through the space, but the contents do not pass through it.
Quadralateral Space:
Borders: Teres minor, Teres major, long and lateral heads of the triceps
Contents: Axillary nerve, posterior humeral circumflex artery
Triangular Space:
Borders: Teres minor, Teres major, Lateral head of the triceps
Contents: Scapular circumflex artery
Triangular Interval:
Borders: Teres major, Long and Lateral head of the triceps
Contents: Radial nerve and Profunda brachii artery